This interview with Maria Belen Power, of Green Roots, was conducted and condensed by frank news. Photos by Haley Albert.

Chelsea is the smallest and second most densely populated city in the state of Massachusetts. It’s about 1.8 square miles and has 38,000 residents, although we know it’s hugely under counted because of immigration status. There is an estimate of 45,000 residents. We are surrounded by water in three ways. The Chelsea Creek, the Island End River, The Mill Creek, and they come together in The Mystic. 70% identified as a racial or ethnic minority. 60% are Latino. 24% live below the poverty level, which is above the 10% state average. There are about 35 languages spoken at Chelsea public schools. That gives you an insight into the diversity.

Why is Chelsea the best choice for this pilot program of a microgrid?

I think there’s two ways to look at that. When you look at the industrial burden and the environmental burden the city of Chelsea carries for the entire region, we don’t think it’s a coincidence that our folks are people of color, low income, immigrants, non-English speakers, etc. This is a clear case of environmental racism and environmental injustice, and that’s a part of our work. The Chelsea Creek, one of the waterways that surrounds Chelsea, holds 100% of the jet fuel used at Logan Airport. The creek is also 70-80% of the region’s home heating fuel. Also along the Chelsea Creek is the largest road salt pile in the Northeast. All of the road salt that is used in all of New England, over 350 communities use the salt, is stored on the banks of the Chelsea Creek. The rest of the waterfront is covered by airport related parking and other industries. This isn’t a burden that everybody carries. It’s also not something that happens in every community in Massachusetts. It happens in low income communities and communities of color.

On the other hand, the possibility of doing the microgrid pilot exists because we are such a small and tight knit community, and organizations like Green Roots have been base building and community organizing for 25 years and have a real connection to the different stakeholders and players in Chelsea. While we’re not always in agreement, we have great relationships with folks at City Hall. We also have good dialogue with the industries. We have a quarterly round table with the oil industries on the Chelsea Creek as a way of holding them accountable and really making sure they’re responding to the fears and needs of the community.

It goes up and down. Sometimes they are more responsive than others. There’s a part of it where they want to be good neighbors. There’s another part of it that we, as Green Roots, see a future where the oil industries are no longer here. That’s not going to happen tomorrow, so at the time, we want to be in dialogue with them so we hold them accountable. One of the things they’re not happy about is a lantern event we had with our youth group. They displayed all of the contaminants the oil terminals had spilled into the creek. We used the EPA’s data, and created lanterns that were color coded by company, by chemical, and by year. It was a way of sharing data with our community. Of course the oil terminals were not happy about it. It did open a conversation for us. At the next round table meeting we talked about these violations. The EPA and the federal government are not doing anything about it. The only thing we have to resort to are these local relationships we have, and for them to respond to the community.

In terms of the microgrid pilot we are one of two communities within the Green Justice Coalition running the pilot. One is in Chelsea, one is in Chinatown with our partners at the Chinese Progressive Association. Our models are very similar in terms of being ground up, being led by the community, and the buildings that were chosen came from our members. Both of our organizations are membership led. Our decisions are informed by our members.

At the beginning we were looking at a map of Chelsea, and we were thinking, “What are the areas that are most prone to either flooding or to being impacted by an environmental disaster or hurricane or storm?” We were looking at the waterfront. In terms of buildings that would be the first hit during a storm. We quickly realized Chelsea is so small, and we want to be able to connect the microgrid to other buildings that are in other places of the city. Instead of looking at geographic locations, we started thinking about, “What are the populations that are most at risk?” And what is the key infrastructure, the critical infrastructure, that would need to be kept on? We came up with a lot. We came up with a huge list of buildings, including City Hall, the senior center, the police department, the fire department, the 911 center, two medical facilities. We included the Chelsea public schools, the Chelsea housing authority for the public housing tenants, the New England Produce Center which is a huge distributor of fresh produce and vegetables. We also included T&E as the neighborhood developers. It’s the local CDC, the local community development corporation that provides affordable housing.

What are the next steps for installing and working off of the microgrid logistically?

The first step was choosing the buildings. The next step was getting their energy usage data. We ask for their utility bills for the past twelve months. Right now we’re in the feasibility study, trying to prove that this is possible and it’s sustainable. That we can actually build this. After gathering utility bills, then we hone in on three buildings. The three buildings were City Hall, Beth Israel Medical Center, and a public housing building of the houses seniors and disabled folks.

The Green Justice Coalition partnered with a group of technical folks to help us develop the microgrid model. Our expertise is in base building and in community and in developing long-lasting relationships. Our expertise is not in this technical world of how can we create a microgrid that can physically disconnect with the grid if there was a power outage. We partnered with the RUN team, resilient urban neighborhoods, made up of six different entities that are engineers, have worked in the industry, in the utility, and have really experience in the technical piece of the microgrid. Maria: So that coalition, the RUN GJC, there’s a lot of acronyms.

The RUN GJC team are developing this model. We are pulling the relationships we have on the ground. We are facilitating the gathering of the data. We’re actually implementing a survey in the community around energy usage, around climate resiliency, to make sure we’re grounding this project in the community. Then the technical folks are doing their piece which is developing the model of how would it work. What is the capacity for each building to host either solar panels or battery storage, and how can you plug that into the other buildings?

The difference between the Chinatown model and the Chelsea model is that in Chelsea we’re pursuing a municipally owned microgrid. A microgrid that’s managed, owned, and operated by the city. So that it’s more accountable to the ratepayers and to the residents. That’s one of the pieces we’re really excited about, the municipalization of energy which we think is a step towards energy democracy. We’ve had a couple meetings with the city manager and with folks at City Hall to figure out how that would work and what we need to do. We’re also pursuing community choice energy for the city to be able to decide where they purchase their energy from. Several cities in the state of Massachusetts have gone in that direction and are getting lower rates and more renewable energy because they’ve chosen a different utility, a different energy provider.

How has the community been responding?

A microgrid is not a new thing, and I think the reason why our project is exciting is because this is not a helicopter down, top down, model where an investor or a utility company says, “Hey, this would work for you. Let’s do it in buildings A, B, and C.” It’s actually been a ground up model where a community based organization like Green Roots who has been deep in community work in Chelsea, is the one that led the charge into choosing which buildings the community feel are the most critical. Before this feasibility study started, I was like, “Really, a microgrid? Why are we doing a microgrid? This sounds so wonky and technical and boring,” but the more we learn about it, the more we do it, I think it does prove a very exciting way of doing things that really centers community and is rooted in community.

Hurricane Maria had just hit Puerto Rico, and we were talking about the microgrid. We were talking about the priorities for Green Roots. Around September 2017 we were having this retreat, and folks were prioritizing the areas of work that we should focus on. The microgrid and energy democracy came at the very top. A lot of staff at Green Roots were shocked because, like I said, it just seemed so technical and wonky and boring, and just not the kind of stuff we’re used to doing. We’re used to doing a lot more community organizing and fighting proposals and doing petitions and protesting. It’s a much different direction to be thinking about how do we create the solutions? It became clear that this connected with the residents because of Hurricane Maria, and it became an opportunity for us to think about how do we do things differently? What would it look like if Hurricane Maria had hit Chelsea, and how could we be better prepared to deal with a disaster like that and the energy infrastructure that’s not set up to sustain that? 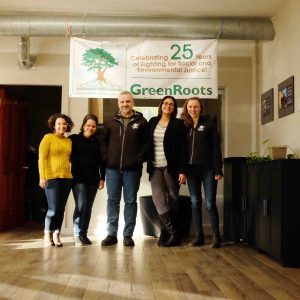 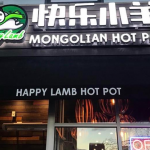 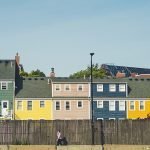 Dorchester Reporter – Letter to the Editor: Baker lets public utilities off the hookBlog