NORWOOD, MA – Dozens of protesters, including workers who say they are owed more than $15,000 in back wages, gathered on Route 1 in Norwood on January 13 before marching on the offices of Fairfield Residential.

The local construction workers, their supporters, and local clergy members delivered a letter calling on luxury residential outfit, Fairfield Residential, to pay the back wages the workers are owed for Fairfield projects. They demanded that Fairfield’s subcontractor, Force Corporation, pay the owed wages immediately.

Advocates pointed to Force Corporation’s long history of controversial labor practices as evidence favoring their case. Fairfield should have known they were utilizing a subcontractor who may potentially engage in unethical labor practices.

Protesters also demanded that Fairfield negotiate with workers and the community to establish a documented process to prevent future wage theft by Force Corporation, or any other subcontractor it uses.

Workers have banded together across the state to propose legislation that would curb the more than $700 million in wage theft that occurs each year in the Bay State.

For more information on the circumstances and victims of the wage theft incidents, or to receive a copy of the letter delivered to Fairfield Residential, contact Diego Low of Metrowest Worker Center at 617-818-2566 and Raúl Figueroa of Fuerza Laboral at 401-749-3975. Both are also members of the Immigrant Worker Center Collaborative.

Metrowest Worker Center is an immigrant worker-led organization based in the MetroWest area of Boston, Massachusetts, which organizes to defend and expand the labor, civil, and human rights of all workers.

Fuerza Laboral is a workers’ rights center whose mission is to shift the balance of power in our economy in favor of workers by educating, training, and organizing workers to become community leaders; taking direct action to recover unpaid wages and improve workplace conditions; and organizing to win institutional changes that will better prevent injustices. 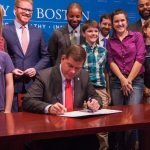